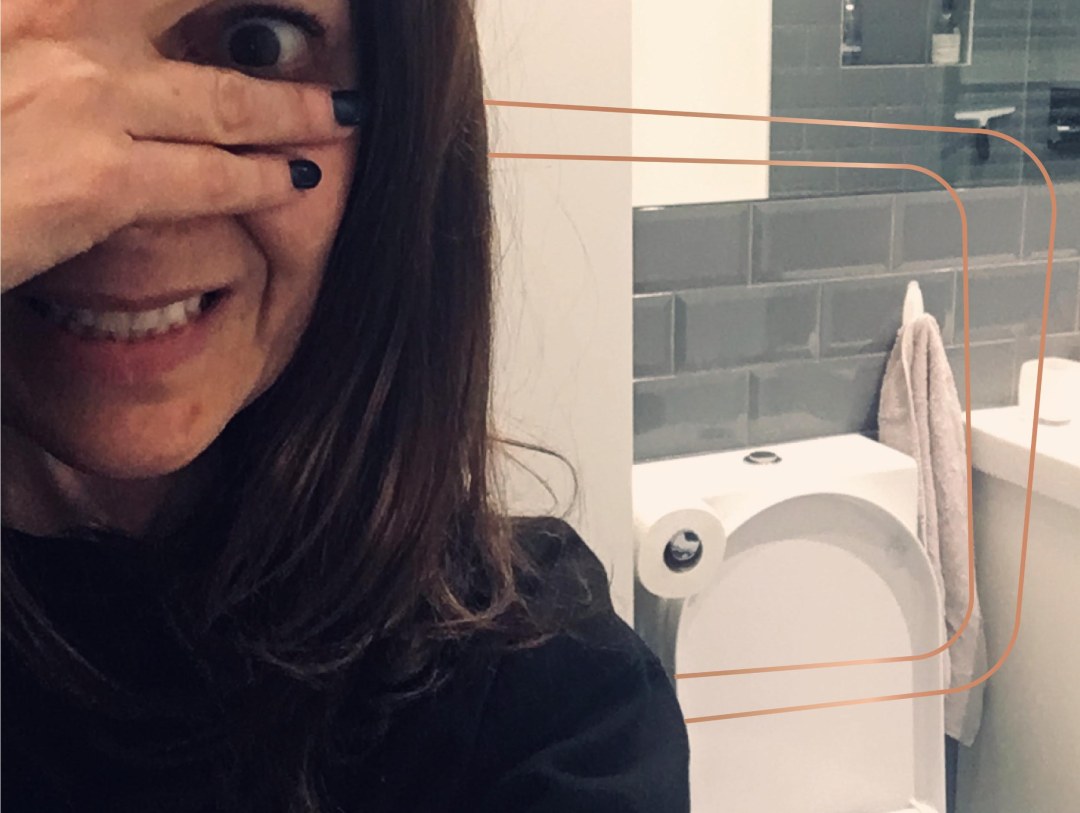 They say that absence makes the heart grow fonder. Well it also shines a megawatt light on all of the things that improve in someone’s absence. Let me explain. My very spirited third child was lucky to have had the chance to participate in a 2-and-a-half-month residential program in Israel. He was gone from late October till just a few days ago.  We, his parents and 3 siblings, felt his absence as strongly as we normally feel his presence.  He’s a kid who has something to say about everything (and he says it), is constantly bouncing a ball, snapping a rubber band, rifling through the snack cabinet, jumping up to touch the ceiling…. he is energy personified.  He leaves his mark wherever he goes in the form of trails of clothes, cookie crumbs, wet towels, and quite often, laughter.

So, when my son left home, the change was palpable and immediately evident. The most noticeable one was bathroom related.

I mention pee and toilets a lot in my posts (and in my blog tagline!) because with three boys, (and a daughter too, actually) this is a major recurring theme of my life. My three boys aged 17,13 and 11 share a bathroom and no matter how often that room gets cleaned, it’s never enough. Towels, tissues, toothpaste, hair gel, deodorant, lotion, face wash, mouthwash, zit cream all leave their trails and telltale signs of use, but the pee. So much pee.

All the more of it when certain family members don’t bother to flush. I know. Gross.

Every morning I feel like I’m in that scene in Good Will Hunting, the one where Ben Affleck tells Matt Damon that his favorite part of his day is the 10 second walk up the path to his house, when he’s not sure whether Damon will open the door and come to work or whether he will simply have vanished without notice, off to live his best life somewhere else.  As I walk past the boys’ bathroom, I hesitantly crane my neck through the doorway and the 2 seconds between me sticking my head in and directing my gaze towards the open bowl is the best 2 seconds of my morning. Those 2 seconds are brimming with the possibility that this morning, unlike every other morning, there will be clear, fresh water staring back at me. That all of those flushing lessons I’ve administered (“Step 1: Press the button on top of the toilet. Step 2: There is no Step 2, for God’s sake.”) have finally paid off.

I am rarely rewarded with the sight of gleaming white porcelain winking back at me from beneath a pool of water, but when I am, visions of my boys setting sail for adventure on a large, majestic ship flood my imagination.  Off they go, prepared, fully formed adults, as I wave a hankie and wish them good luck, shedding a tear of pride, knowing that I’ve fulfilled my role as their parent.

One day, a couple of months ago, I walked past the bathroom, poked my head in and my fantasy became reality in the form of a crisp, shiny bowl with nothing but good old H2o in it. I did a mental fist pump, smiled to myself and got on with the business of getting everyone off to school. The next day, a bit more optimistic, I had a quick look as I walked past and was again greeted with the sight of a clean, glassy water.

#Winning, I thought. By day three I started to view it as my God given right to have children who were so responsible that they flushed after each use and after day 4, I stopped checking altogether.

It was sort of like when you have a zit or scratch on your face that consumes your thoughts so that you can think of little else and then one day, when these things are gone, you don’t notice their absence so much as you notice that you feel lighter, have more headspace.

So it came as somewhat of a surprise that when, a few days ago, I went to collect some dirty laundry from the boys’ bathroom and my peripheral, supermom vision picked up something yellow.

Hadn’t we moved past this? I thought, as I scanned the bathroom for other signs of regression and that’s when my eye landed on something that explained everything. There were 3 toothbrushes on the sink, whereas for the past couple of months there had only been 2. Child number three was back and along with his return came the realization that he had been the toilet bandit all along.

I’ve always been pretty good at deducing which kid was responsible for which transgression but this one had been a three-way tie until a natural, unplanned experiment revealed all I needed to know. And now he knows that I know and has promised to up his efforts in this area as well as others, an added bonus. In his defense, my good friend Kate hypothesized that he is just being eco-friendly, flushing only when essential. She is a skilled barrister and is particularly adept at finding shadow of a doubt in the unlikeliest of places so I listened attentively to her elegant point.

“You know”, she intoned, “‘If it’s yellow let it mellow, if it’s brown flush it down.’ Or something like that.”

Kate has two little boys, one still in diapers. Let’s see if she’s still as optimistic in a few years.

And I now know that a foolproof way of matching all future disastrous household events with their rightful perpetrators is to send each child away for a month or two, one by one, until the truth reveals itself.  If you happen to have a spare room where you might house my children during ongoing investigations, do let me know.

2 thoughts on “Process of Elimination”