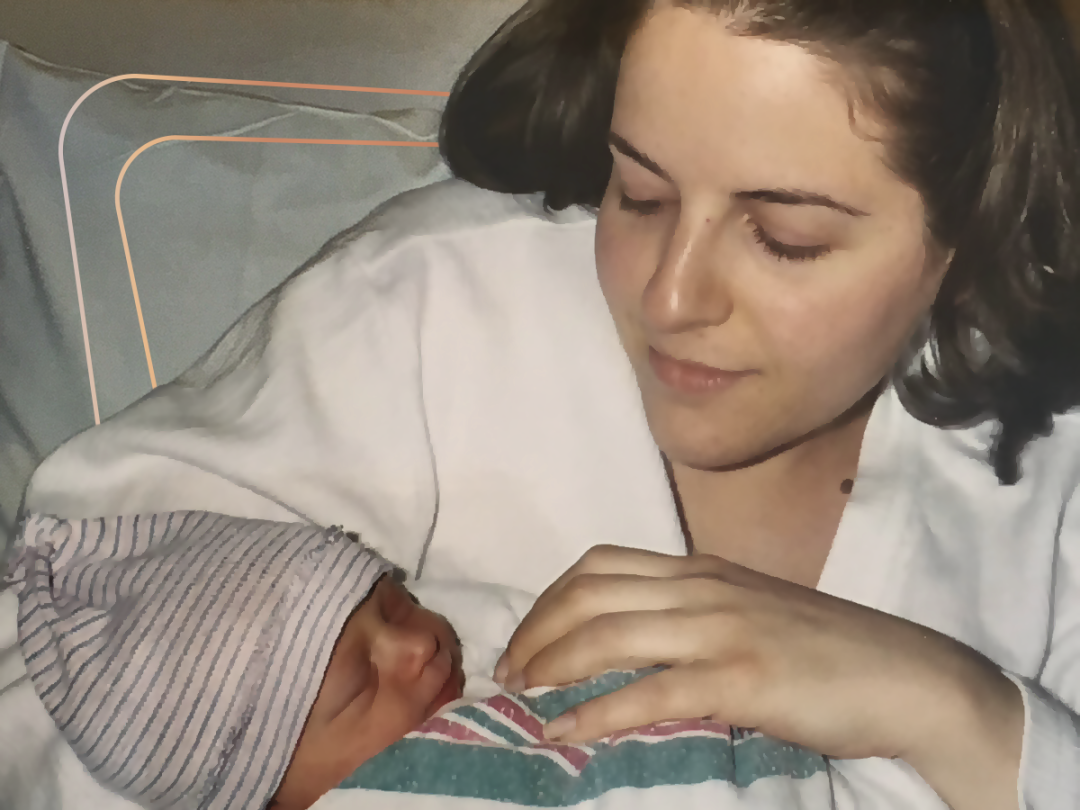 Well, I blinked and my baby daughter turned 16 this week. I thought long and hard about what the perfect gift for a teenager would be and concluded that it is this: a blog post dedicated to her. What teen would want AirPods when they can have a bespoke piece of writing in their honor?

This is also an excellent way to find out whether she’s read this because unless she bursts into my room shortly, wondering “Wait, is this my actual present?!” I’ll know that she hasn’t.

I’ve told the story of her birth hundreds of times but never recorded it for posterity.  Exactly 16 years later I’m doing just that.

So now, for the first time in black and white, may I present:

The Day My Daughter was Almost Born Near Exit 11 on the New Jersey Turnpike.

The primary issue was a logistics one.  Near the end of my first pregnancy, Phil and I left our cramped New York City apartment for the vast plains of central New Jersey. Determined to hold on to any remaining vestiges of city life, I stayed with my New York doctors, refusing to switch to ones closer to our new home.  What used to be a 10-minute taxi ride to my obstetrician became a 45-minute commute; inconvenient but worth it.

Our firstborn son took 36 hours to emerge–I was medically induced on a Wednesday and he was born on a Friday. There was no issue getting to the hospital on time.

Early on a Monday morning less than 2 years after he was born I sat across from my doctor, a dead ringer for Noah Wyle of television’s “ER”, and asked to be induced again. It was 2 days before my due date but I was already in the city with a packed duffle bag, full face of makeup and freshly blown hair (because DR. NOAH WYLE), our 22-month old son was being looked after and I like controlled environments. Why sit at home playing the waiting game when we could handle this in a civilized manner?

With no medical reason to induce me, my doctor offered me a natural alternative: the stripping of my membrane. I’ll spare you the particulars of this procedure, look it up if you dare. Don’t say I didn’t warn you.

“But last time I had my membrane stripped and it didn’t work, I had to be medically induced anyway” I whined.

“Last time it was done by another doctor.  This time it’s me and I guarantee this will set your labor in motion”, he said confidently.  I was skeptical.

He stripped what had to be stripped and told me to go hang out and wait for labor to start.

And by “hang out” he meant in the vicinity of the hospital. I didn’t find that out till much later. Too much later.

In a hormonal huff I sent Phil off to his midtown office and I took the train back home, overnight bag in hand, irritated not to have gotten my way.

I walked over to my sister in law’s house to complain about my day and to help her hang some bedroom curtains when I started to feel crampy….and crampier, enough to call Dr. Hottie who told me to drink a glass of water and see if they disappeared.

“They’re getting worse,” I told him on the phone.

Satisfied that his magic hands did what he predicted they’d do, my doctor said he’d head over to Lenox Hill Hospital and meet me there. Only he thought I was in New York and didn’t realize that I’d stomped off to NJ like a raging toddler.

If this story was a movie, this next scene would be the fast paced, chaotic one where the camera cuts from one close call moment to the next while loud, quick horn-based music plays in the background. (Think:  Ferris Beuller’s Day off when Ferris is racing to get home so he can jump into bed in time before his concerned parents, who think he’s gravely ill, do.)

With Phil in New York, the closest family member available to get me to the hospital was my sister in law who was also my good friend.  Unlike me, she had a taste for adventure and this situation had “adrenaline rush” written all over it.

We got on the New Jersey Turnpike at exit 9 and had to make it to the George Washington Bridge, exit 18. During rush hour. And then across town from the West side to the East side. Also during rush hour.

The contractions were coming hard and fast, but I’d read that as long as you can talk during labor there was plenty of time before the baby was born so I blabbed about anything that came to mind and repeatedly thought:

I distracted myself by painting my toenails,  reasoning that I’d be looking at my feet in stirrups soon and I’d be damned if they didn’t look as good as my hair. I visualized giving birth in a crisp, sanitary hospital room.

My cell phone rang. It was Phil asking how I was holding up.

I married Phil for many reasons, an important one being that he’s a problem solver, a man who gets things done.

“I’m calling 911 and getting you a police escort”, he said authoritatively, and hung up.

“PHIL IS GETTING US A POLICE ESCORT!” I growled at my sis in law through clenched teeth and an intense contraction. This was music to her ears; she hit the gas, opened the window and yelled “YeeeeeeeHaaaaaaa”, her long hair whipping her face.

Then my water broke. The towel I sat on made a valiant but unsuccessful attempt to protect the leather seat.  It was like sitting in a warm kiddie pool.

By the time I heard the siren wail I was on all fours, my head out the window, panting like a dog.  We pulled over somewhere between exits 11 and 12 and a police officer approached our car, no doubt to tell us to stay close on his tail as he zoomed us through traffic. But no, he only came to say that an ambulance was on the way.

“I don’t need an ambulance” I seethed, “I need you to lead us to my hospital where I’m going to have this baby!”

“Ma’am, you’re not going to make it to the hospital,” he said leaning into the backseat window.  Another siren wail heralded an ambulance pulling over to the side of the Turnpike. A new face poked through the window next to me, this one attached to a green EMT uniform.

“Ma’am!” he said opening the door to the backseat where I was breathing in quick spurts, “You’re in heavy labor, I need to see how dilated you are. Please lay down”.

As he said this he pulled the longest, thickest green glove I’d ever seen over his hand, up his arm, past his elbow and up to his armpit.  I tried not to think about why that glove was so long and my gaze landed on his sincere, reassuring smile. A smile that featured a single tooth in his upper gum.

A vision crystalized in my mind of this man with his hand so far up me that he needed a glove that long and my child’s very first human encounter being with this toothless stranger and I screamed, “I. AM. NOT. HAVING. THIS. BABY. IN. THIS. CAR!”.

He insisted I sign a form stating that I’d waived my right to medical help and I yelled “DRIIIIIIIVVVVEEEEEE” at my sister in law as we sped away. The police officer who was first to arrive on the scene shot past us and from his open window yelled “Follow me, ladies!”; I pictured us on the 6 o’clock news, choppers hovering overhead.

Phil called again to report that 911 said because we were crossing state lines, our police escort couldn’t take us past the bridge which led into Manhattan. Once we crossed we were on our own. Disaster.

We sliced through the Turnpike traffic like a hot knife through butter which would have been great except that we had no plan once we left New Jersey.

As we approached the bridge a vision came into view: a  police officer in an NYC uniform was waving us down.  I don’t know what Phil said to convince two separate state

jurisdictions to work together but there he stood, signaling us to follow his car. We thanked the New Jersey officer and fell in behind the black and white New York patrol car.

Weaving jaggedly but quickly through thick Manhattan traffic, I willed my baby to stay put while my sister in law said at the top of her lungs “THIS IS SOOOOOOO AWESOME!”.

A team with a gurney was already waiting curbside at the Emergency Room entrance to whisk me up the delivery room where my perplexed doctor waited, wondering where the hell I was.   Safe within the hospital walls, I allowed myself to acknowledge how heavy my contractions were and I let out  a primal scream, just like in the movies. People stared.  I didn’t care.

“Hold the elevator”, one of the emergency team said, “I have to get my medical bag.”

“In case you have the baby in the elevator,” he answered calmly, already out of my sight.

By the time I finished my tirade of “I did not race up the New Jersey Turnpike and through New York traffic to have my baby in this elevator” he was back and up we went.

Within minutes I was in a bed with my legs up, admiring my freshly painted toenails through waves of pain, and my sister in law who’d gone to park the car, materialized.

Yes, where in the hell was Phil? His office wasn’t far from the hospital; he should have already been there. Then in he ran, a nervous wreck. Dr. McDreamy sensed that he needed a second to chill out and sent him to the nurse’s station to complete some paperwork.

By the time he returned to my room I was ready to push. Not that I even had to. Unlike her older brother whose head was the size of a yoga ball, my tiny girl flew out so gracefully I didn’t feel a thing. A blond haired, blue eyed bundle weighing a mere 5 lbs. 14 oz., she aimed to make my life easier already from birth.

In the nine years since my mother died at 42, my daughter was the first girl born in our family and the first to be named after her late grandmother, giving us all some much needed comfort.  Her dramatic entrance into the world gave us a glimpse of what would later become full blown performance arts skills- she is a gifted singer, dancer and actress.  As she transitions into adulthood I can see the great adventures we will have together. The kind that are planned in advance.